Oil sticks on paper and oils on canvas by Heather Stewart

Heather Stewart’s art practice is multidisciplinary and includes, painting, drawing, sculpture and collage.
She has been making art for many years in her Moriac studio.

The larger painted works, take as their subject the littoral edge of Kennett River beach on the Great Ocean Road, while the smaller studies were completed en plein air along the Gibb River Road in the Kimberley.
Heather’s interest in form; the solidity of visible shape, pervades both the top end pictures and those reflecting the southern light.  In retrospect the light and mood in the pictures create a contrast that is impactful. In her practice are the   ideas she is thinking about at the time. These ideas might be about visual language itself and the materiality of the work; about light and mass, colour and form, line and texture; about seeing/thinking and feeling; about space/time or they might be about trying to understand the world as it unravels and renews. She is aware of the poignancy of the remote landscape and that it is a privilege to be there.

Implicit in the work is the notion that the eye roams at varying speeds; stopping to investigate detail, taking in a panorama, incorporating imaginings, often clouded by life’s joys and sadnesses; referencing faded images from the past and those painted by much admired artists.  Heather has tried to unify multiple viewpoints and perspectives, creating incongruous vistas. The discrete passages of time and space of the Kimberley and Kennett River land and seascape represent the nexus between the seen, the known, the felt and the undescribed world. 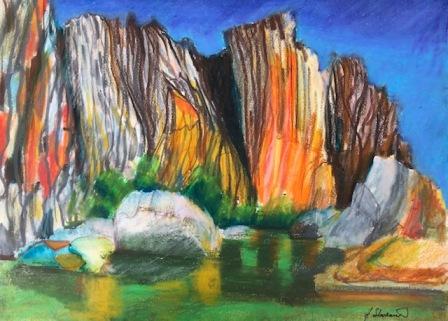